It is considered the most complex aspect to master in computer-aided design (CAD) because it requires the CAD software to simulate the object from within and outside. This is critical as it lets designers provide cutaways of the design, such as an engine and its components.

Solid Modeling can start with various two-three dimensional designs - such as wireframes and sketches - or basic geometric shapes like cubes, spheres, cones and cylinders.

And voila, you have a 3D model of pretty much any object you can think of.

The true complexity of solid modeling is in its parametric features and range of operators - solid modeling allows the designer to manipulate and transform these basic solid shapes using various operations like “subtract”, without losing “solidity.”

For Example, “subtracting” is the process of changing a single (or multiple) features of a model - like creating a hole in an object - while maintaining the original structure.

This is done using CAD software like SolidWorks or AutoCAD - which are among the most popular modeling systems.

But what exactly is going on in the background of this software?

When it comes to 3D design, solid modeling does all the heavy lifting - it auto calculates difficult engineering equations, that would otherwise be a mess to do manually.

Solid modeling software relies on the need for extreme accuracy of information in mechanical geometry - not surprising, considering what the software is used for.

Effortlessly solving complex math is essential when every aspect of a design is represented as an equation - solid modeling in a nutshell.

If a car manufacturer wants to produce an F1 race car that is perfectly aerodynamic to design spec, it needs to make sure that the measurements established in conceptual design are translated correctly into the design software. 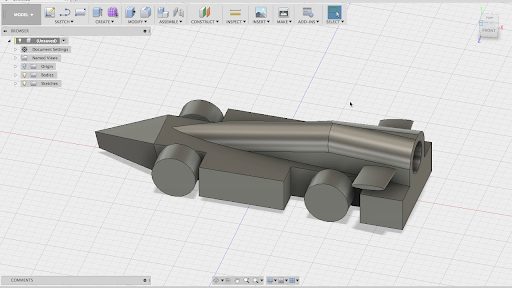 Imagine if the supercar was manufactured, while being a few millimeters off on various angles.

Without this mathematical accuracy it would be impossible to create (or manufacture) an object (or product) with consistency - just look at the complexity of the below design. Solid modeling and its computational power makes this a seamless operation.

All design components that have a finite size and well defined boundaries need a home - basically where they can be represented as a “tangible” design.

Euclidean space is the environment where mathematically created parts can be added, removed and changed.

In basic terms, the space is a theoretical backdrop by which a series of points (or vertices) can be connected together using coordinates - for the purpose of creating a 3D image.

In fact, this is the exact process of creating an initial wire frame design.

Key Elements of a Solid Object

Solid modeling can be further defined by four differentiating factors, compared to wireframe and surface modeling:

Solid modeling was originally created as a planning and verification tool for machining and assembly - but has since evolved it’s use case for many other industries.

3D modeling software is no longer just for engineers.

Aside from being able to design products, the software is now being applied to interior design, 3D printing and media, like video games and movies.

With more open source modeling software coming to market one thing is clear - the future for solid modeling and 3D software is just beginning.